When do you need ionisation?

The primary function of an ioniser is to neutralise electrostatic charges on insulators and isolated (non-grounded) conductors to reduce the magnitude of electrostatic discharges in the ESD protected area.

A common example of insulators and isolated conductors is a populated circuit board where the board is a process essential insulator and often components on the board are isolated (non-grounded) conductors. Most companies handling electronics have such sub-assemblies in their products.

Bondline provide a full range of ESD Ionizers to help to eliminate the build-up of static charges on non-conductors, ensuring a static-free work area. Click here to browse the range.

Why are ionizers important to use?

The most significant environmental factor in ESD Control is the relative humidity (Rh). When humidity in the working environment decreases, the human body and other insulators can easily charge with static electricity due to friction. The air itself, being dry, becomes a part of the electrostatic build-up mechanism, every time an air flow (wind, air conditioning, blower) come over an insulated surface. Relative Humidity shall be maintained over 30%. Below that value it is recommended the use of ionization.

Conductors: Materials that easily transfer electrons (or charge) are called conductors and are said to have “free” electrons. Some examples of conductors are metals, carbon and the human body’s sweat layer. Grounding works effectively to remove electrostatic charges from conductors to ground. However, the item grounded must be conductive.

Insulators: Materials that do not easily transfer electrons are called insulators and are by definition non-conductors. Some well known insulators are common plastics and glass. An insulator will hold the charge and cannot be grounded and “conduct” the charge away.

Both conductors and insulators may become charged with static electricity and discharge. Grounding is a very effective ESD control tool; however, only conductors (conductive or dissipative) can be grounded.

Insulators, by definition, are non-conductors and therefore cannot be grounded. Insulators can be controlled by doing the following within an EPA:

When none of the above is possible, the insulator is termed “process essential” and therefore neutralisation using an ioniser should become a necessary part of the ESD control programme. An ioniser creates great numbers of positively and negatively charged ions. Fans help the ions flow over the work area. Ionisation can neutralise static charges on an insulator in a matter of seconds, thereby reducing their potential to cause ESD damage.

Note: Ionisers require periodic cleaning of emitter pins and the offset voltage must be kept in balance. Otherwise, instead of neutralising charges, if it is producing primarily positive or negative ions, the ioniser will place an electrostatic charge on items that are not grounded.

Click here to view our full range of ESD Ionizers. 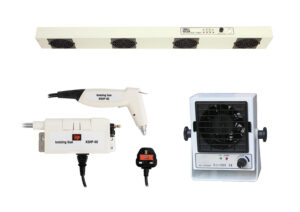 How do ionizers work?

Air Ionization systems work by flooding the atmosphere with positive and negative ions. When the ionized air comes in contact with a charged surface, the surface attracts ions of the opposite polarity. As a result the static electricity that has built up on products and equipment is neutralised. Ions do remove small particles or smoke and pollens from the air, and subjective research suggest that people working in ionized area are happier.

Bondline’s ionizers eliminate the build-up of static charges on non-conductors, ensuring a static-free work area. Ionizers generate positive and negative ions which neutralise any static charges on insulating materials which cannot be grounded in the normal way. They are ideal for electronics industries which work with static-sensitive electrical components or devices.

We offer a range of ionizers to suit your requirements including:

Click here to view our full range of Ionizers.

Do I need an ‘Overhead Ioniser’?

Overhead ionisers ensure a static-free work area by neutralising static charge on insulated objects by producing a balanced source of positively and negatively charged ions. They are light-weight, quiet and are high-performing. The fans are independent of each other with individual controls and circuitry. These units have a built-in auto-balance feature with an out-of-balance alarm. 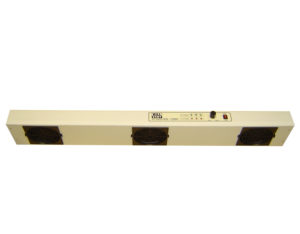 Do I need a ‘Bench Top Ioniser’?

Bench top ionisers are used to ensure a static free work area by neutralising static charge on insulated objects by producing a balanced source of positively and negatively charged ions. Its smaller size and lighter weight have made it more convenient to use which is great for workstations.