Either rendering workstations useless or increasing company expenditures for repair, uncontrolled static discharge and particulate matter contamination can cause huge disruption in productivity of companies. In managing this, customers often aim to achieve a de-ionised or ionised air flow workplace with the use of ionisers.

Ionisers, otherwise known as ionizers, come in many types and forms, all of which have different features and functions. They are generally used on table tops, overhead workbenches or in interior extremities of machines. Ionisers work by flooding the atmosphere with positive and negative ions. When the ionised air comes in contact with a charged surface or object, the surface / object attracts ions of the opposite polarity. As a result, the static electricity that has built up on products and equipment is neutralised. Ultimately, helping to protect static sensitive devices from electrostatic discharges (ESD) or electrostatic attraction (ESA).

Bottomline, ionisers maintain the longevity, quality and integrity of assets enabling companies to remain unhampered in delivering their products and services. To help you decide on which type of ioniser best suits your company, below is some information you can use.

ESD ionisers are devices specifically designed to remove static charge across all kinds of surfaces. As static energy is commonly generated in production lines, ionisers prevent static charge from causing product defects and contamination in the first instance. You can consider ionisers as a sort of quality control device. Ionisers can solve static issues in these applications, including: plastics, adhesives, explosives, textiles, glass and optics, moulding, precision weighing, parts cleaning and carding process.

In manufacturing/production facilities, static can cause a variety of problems such as process issues, lockups, contamination, product defects/failures and can even be a safety hazard by causing shocks to people.

When working on printed circuit boards (PCBs) or manufacturing medical devices, it is imperative that you eliminate electrostatic discharge (ESD) and particle contamination from the environment. If either of these happen to be in the surrounding, they can cause significant damage to static-sensitive components on the assembly line. Resulting in high costs and replacements.

To protect your production line process from static and particle damage, ionisers make an excellent solution to static and particle control. Generally, ionisers are used when it is not possible to properly ground everything. It can also act as a backup to other static control methods and helps to make the atmosphere both healthier and less prone to ESD.

Equipped with the capacity to pinpoint and monitor static energy across various environments, static eliminators or ionisers can eliminate static charge ranging from an entire room or specific focal points. The three types of static ionisers you can find are: bar type, blower type, and spot type. These are all designed to be compact and compatible with different energy sources.

This corona of ions then interacts with electrons in nearby gas molecules. With the use of alternating current (AC) or direct current (DC) the ionised air is pushed by the motor in the ioniser towards the surface you are aiming it at.

With the vast range of ionisers available in the market, it has afforded industries to be more agile, flexible and adaptive to different working conditions and the increasing demand of their products and services. With recent advancements, static ionisers have become intelligent. They can detect, screen and assess thousands of products in seconds, ensuring swift and consistent production.

When Should You Use Ionisers?

Static electricity and particulate matter contamination is a problem in a range of industries.

1 ) The first is the discharge of electricity onto an electrical component. Known as ESD, electrostatic discharge can alter the functioning of electronic circuits permanently.

2) The second problem caused by static is that a charged object can attract particulate matter onto it. Known as ESA, electrostatic attraction can cause the charged object to become contaminated and no longer usable.

In fact, ionisation is increasingly being used inside cleanrooms as more engineers realise that air filtration alone does not ensure the elimination of particulate contamination from subvisible particles (less than 25 microns). If you cannot uninstall features of your work area that are insulative the only alternative is to use ionisation.

Insulators are charged by triboelectrification or rubbing against other materials where electrons are exchanged resulting in the creation of a charge. For example, ionisation is often used in the manufacture of plastics to dissipate the ambient charge generated in low humidity by plastic film rolling over metal production lines.

The amount of charge that can build up in these situations can literally cause people to feel themselves being zapped if they are near enough the static electricity.

Where Are Ionisers Used?

Depending on the situation, function, and application, ionisers best function if they are appropriated based on the specifics of your needs. There is no best universal type of ioniser, each has its own specific function and limitations, and there are many factors to consider when selecting which ioniser to purchase. These factors include: environmental considerations, installation rigor, type of company operation, available budget, and the features required.

Hence, there is no right or wrong – just a myriad of options for you to choose from depending on your budget, needs and requirements. For example, if most of your workspaces have limited workspace, overhead ionisers would be most appropriate. It is ergonomic and will allow for ease in mobility of your workforce. On the other hand, if your operations are dust or debris-heavy, then a compressed air ioniser would be most appropriate.

There are various alternatives for you too, when you consider the budget you have to work with.  It goes without saying that the more expensive items tend to be sturdier and more resilient compared to the affordable options.

Recent technological advancements such as software-mediated operations are incorporated in the high-end alternatives, which are capable of monitoring and recording the operations remotely and individually. In the end, it is up to you to compromise depending on your objectives and willingness to invest.

What Problems Do Ionisers Solve?

All three can result in a loss of money and time replacing everything.  This is something all companies try to avoid.

Before investing in ionisation equipment it is important to evaluate the task it must accomplish. First, consider the discharge speed required by the dynamics of the process (i.e., the requirement for positive/negative ion balance should be determined in terms of process- or product-charge sensitivity). Next, resist the temptation to specify the means of achieving the desired performance.

Instead, when specifying ionisation requirements, set specifications around performance requirements. (Setting technology requirements can lead to choosing a less desirable solution, which can result in a costly mistake.)

The process should begin with answers to three questions:

1 ) What decay time is required for a reasonable level of product or process protection?
2 ) What offset voltage can the process accept?
3 ) How will parameters and results be measured?

Below are the common types of ionisers used in the industry. Do remember that you can mix and match these ionisers depending on your specific space, operations and requirements. There are types which allow for sharing a unit, while others are stationary and heavy duty.

If you have a large area but are still looking for a space saver option, this will suit your style and preference. These ionisers are compact and can be suspended either through the top of the table or a flexible mounting arm. The advantage of this setup is it manages air flow effectively.  Not to mention that it can be alternately used by two workers. Workstations just need to be moved adjacently to each other, allowing for a shared workspace where an ioniser is in between them. Also, these ionisers can be easily moved, transferred, and repositioned to any locations in the static control area should you wish to revamp the workspace. 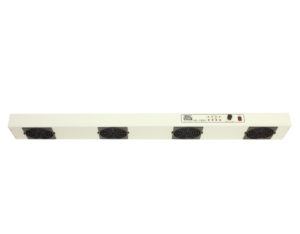 If you have limited space to work on, this type of ioniser is ideal. It better regulates the air and provides more room to squeeze in more workers to the benches. These were created to address the need for better flow of ionised air. Workbench stations often block the flow of ionised air resulting in the spread of static energy, leaving more work to be done. In this kind of setup, the ionisers are mounted in brackets or attached  to a shelf 17 to 24 inches above the bench and workstation. This downward flow of air ensures that static energy is removed thoroughly.

Compact and more suited for mini-environments, ion bars are overhead ionisers which eliminate and regulate static energy from the air by being thorough in the tiny details of the workstation and various emitter points. 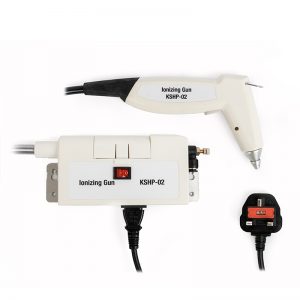 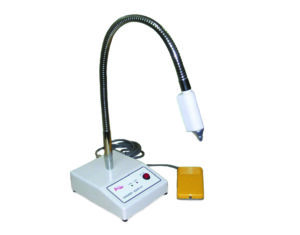 The most common type of ESD ioniser used by various companies to treat contaminations and visual imperfections. Using a compressor with a mixture of nitrogen  or compressed air, objects or products are blasted with this condensed air removing all of the static energy from it. Normally, these types of ionisers are hand-held guns with triggers or push buttons which activate the release of air and ion-flow. There are two-types of  precision ionisers: hand-held guns or mounted heavy duty in a fixed position operated using a foot pedal.

Companies used to create specialised areas in the workplace where ESD hazards are dealt with, these areas are known as Electrostatic Protected Areas (EPAs). Under this setup, multiple emitters are positioned below ceiling height. The removal of ions from the benches rely on the movement of air. This was replaced with workstation specific ionisation as it does not effectively remove all the ions, exposing customers to more ESD hazards.

How Does Ionisation Fit Into An ESD Control Program?

Ionisation is just one component of your ESD Control Program. Before utilising ionisation, you should follow the fundamental principles of ESD Control:

“Air ionization is not a replacement for grounding methods. It is one component of a complete static control program. Ionizers are used when it is not possible to properly ground everything and as backup to other static control methods. In clean rooms, air ionization may be one of the few methods of static control available.” (ESD Handbook ESD TR20.20 Ionization, section 5.3.6.1 Introduction and Purpose / General Information).

Bondline offer a range of ionisers to suit your requirements including:

The growth of electronics, its consequent rise of artificial intelligence and various infrastructural and construction projects all over the world have increased the demand for spare parts, semiconductors and other electronic products. This has created a steady market for ESD ionisers as production has increased.

Bondline has been in the ESD industry for decades. They offer a wide range of ESD ionisers and products which will suit your workspace requirements. All of their ionisers are CE approved and a European plug can be available on request.

If you are interested to know more, do contact them and request a detailed quotation through: Contact Us | Antistatic ESD | Bondline Electronics Ltd or fill in your details below.